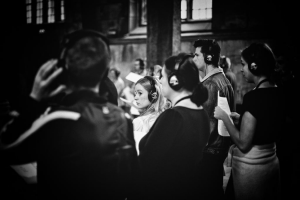 Consumer tech has some drama it’s gossiping about: Apple has failed to release it’s AirPod headphones in time for the holiday season, after making them the centerpiece of the last unveiling event. This marks a rare misstep for Apple, and one of the few soils on an otherwise perfect marketing record. Oh, and very likely several hundred thousand dollars in lost sales.

But why does everyone care? Why is so much at stake for a pair of headphones? They aren’t even the fancy kind that has a built in mp3 player – they’re just earbuds.

Earbuds are never just earbuds. Headphones are as much a part of fashion as they are required tools for navigating an increasingly crowded and loud world – but they haven’t always been this way.

This started the craze for fashion-forward headphones, but it did not really come into its own until 2008, when Beats by Dre launched. Technically, the headphones were nice, but nothing terribly special – but they sounded amazing to those who had been listening with Apple’s original plastic nubs for years. The bass-heavy sound appeals to a massive audience of casual listeners – and the focus on fashion, celebrity endorsement and general bling convinces 11% of headphone users (most people, especially younger) to shell out hundreds on them. They redefined marketing for an entire industry – no wonder Apple bought them.

Beats by Dre solidified that the look and perceived status of a pair of headphones was just as important as the actual quality of the sound they produced when pricing them. However, some would argue that Beats by Dre has actually “expanded the market for higher quality headphones,” not ruined it, by raising the acceptable price of a pair of cans.

Adding to this evolution of the headphone industry is the explosion in popularity of the open office concept, which made news a few years later in 2013 as it hit the mainstream. As many of you, dear readers, know, this plan doesn’t actually help with productivity unless you work in an extremely collaborative industry. Even then, privacy is often needed when buckling down and digging your feet into an assignment.

Enter: headphones as a social cue. To the point where some people don’t even bother playing music, they just put them on when they want to be left alone.

Headphones being used as a social cue, as well as being an important part of most people’s’ daily outfits, has made the technology a pillar of Western society by becoming part of how we communicate. It also means that there are more options than ever before – from $1 pairs at the drugstore for when you forget your favorite pair, $300 ones custom built for audiophile athletes who need perfect sound to push for their next PR, to $1 million custom-made fashion statements for celebrities.

I dare you to look around at your office and see how many people do not have headphones on or around their person. Now check the gym, and the local running path. Even when we’re at home, we generally have a pair somewhere within arms reach.

There’s another metamorphosis brewing in this market: the appreciation for truly great quality headphones that still look great. Sony mastered the price, Apple mastered the exclusivity, Beats by Dre mastered the fashion, and Sennheiser mastered the perfect sound. But there is a growing demand for headphones that are beautiful, functional and affordable, that only a few manufacturers truly meet at this time (we like to think we’re one of them). We’re excited to see how the landscape of concentrating heads in our offices, gyms and commutes changes over time, and can’t wait to see what’s next in the industry.